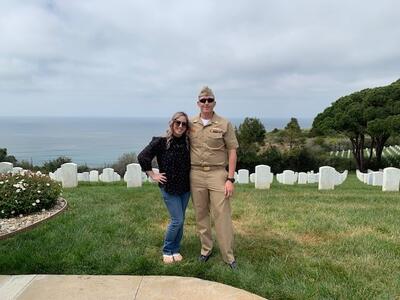 Lieutenant Dale Pettenski is currently assigned as a Naval Science Instructor at NROTCU Yale University. Hailing from Rochester, New York; He received is BS in Fish and Wildlife from Paul Smith’s College and a MS in Watershed Hydrology at SUNY Brockport. Lieutenant Pettenski commissioned via Officer Candidate School in 2015.

His sea tours include: Electronic Warfare Officer onboard USS SHOUP (DDG 86) out of Everett Washington and Fire Control and Ballistic Missile Defense Officer onboard USS Higgins (DDG 76) out of Naval Base San Diego. In 2017, LT Pettenski deployed with the Nimitz Strike Group in the 5th/7th Fleet AOR in support of Operation Enduring Freedom.

LT Pettenski is married to his wife, Michelle Pettenski of Mesa, Arizona. They have two dogs, Lilly (12) and Timber (8). They live in Southington, Connecticut. 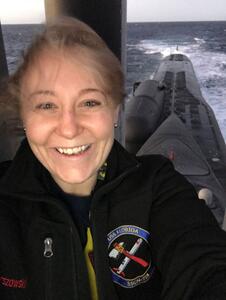 Lieutenant Samantha L. Kitts was born and raised in the suburbs of Philadelphia, PA. She graduated from the University of Pittsburgh in 2015 with a Bachelor of Science degree in Mechanical Engineering and minors in Chemical and Nuclear Engineering. She earned her commission from the Steel City NROTC Unit in August 2015 and was designated a Submarine Warfare Officer.

Lieutenant Kitts  reported to Nuclear Power School in Charleston, SC in October 2015. Following NNPTC, she completed Submarine Officer Basic Course in Groton, CT. She then returned to Charleston, SC to complete the training pipeline at Nuclear Training Prototype Unit aboard the MTS-626.

Lieutenant Kitts reported to her first boat, USS FLORIDA (BLUE) (SSGN 728) at NSB Kings Bay in March 2017, where she served as the Electrical Officer and the Tactical Systems Officer. She completed two AFRICOM deployments during which she supported missions vital to national security.

Upon completion of her first sea tour, Lieutenant Kitts split-toured to the USS SAN FRANCISCO (SSN 711), where she served as the command’s Executive Assistant. The SAN FRANCISCO is in the final stages of its conversion to a Moored Training Ship (MTS) which will train the Navy’s future nuclear operators at NPTU Charleston.

In December 2020 Lieutenant Kitts reported to the Naval ROTC Unit at Yale University as an Assistant Professor of Naval Science and the Nuclear Programs Officer.

Lieutenant Kitts’ awards include the Marine Corps Commendation Medal, Navy and Marine Corps Achievement Medal, and other unit and campaign awards. She is also a certified Resilience-Building Leader Program™ Coach.

Lieutenant Kitts is married to Jonathan Kitts and has one son, Aleksander. 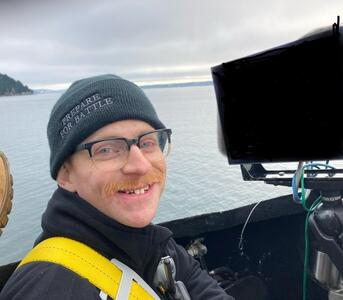 Lieutenant Ryan C. Buck was born and raised in Westerville, OH.  He graduated with a Bachelor of Science degree in Mechanical Engineering from The Ohio State University and commissioned from their NROTC Unit in May 2018 as a Submarine Warfare Officer.

He received orders and reported to his first boat, USS MICHIGAN (SSGN-727) BLUE in Bangor, WA in November of 2019.  Onboard MICHIGAN, he served as the Electrical Assistant, Special Operations Forces Division Officer, Quality Assurance Officer and Assistant Engineer.  He completed a Major CNO Availability and Sea Trials on MICHIGAN.  Additionally, he augmented the crew of the USS CONNECTICUT (SSN-22) and completed a WESTPAC deployment supporting a mission vital to national security.

In August of 2022, Lieutenant Buck reported to the Naval ROTC Unit at Yale University as the Submarine Warfare Officer and Nuclear Programs Officer. 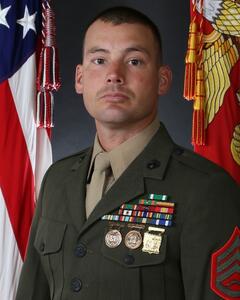