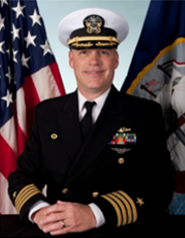 CAPT Ron Withrow, a native of Ohio, enlisted in 1985 in the Naval Nuclear Propulsion Program.  From 1990 to 1994, he served aboard USS ENTERPRISE (CVN-65) as the Reactor Laboratories Leading Petty Officer and the #1 Plant Reactor Mechanical Leading Chief Petty Officer.

CAPT Withrow was privileged and honored to lead the warriors of PCU SOUTH DAKOTA (SSN 790) as the first commanding officer.

CAPT Withrow has received many personal decorations, but is most proud of the unit awards recognizing the high-performance teams he has served with, including three Battle Efficiency “E” awards, the Meritorious Unit Citation, the Navy Unit Citation, and two Omaha Trophy Awards.

He is married to the former Shalene Brooks of Saratoga Springs, NY.  Together they have four children and six grandchildren.