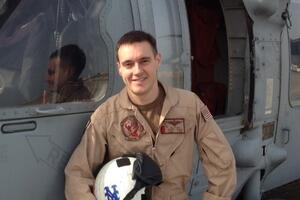 Commander Scott M. Ryan was born in White Plains, New York and grew up in Bedford Hills, New York.  He graduated from the State University of New York Maritime College in 2001 with a Bachelor of Science degree in Marine Transportation, earned his commission through Reserve Officer Training Corps in May 2001, and was designated a Naval Aviator in August 2002.

He next reported to USS DWIGHT D. EISENHOWER (CVN 69) as an Aircraft Launch and Recovery Officer, or “Shooter,” and deployed in 2009 and 2010 to FIFTH FLEET, in support of Operation Enduring Freedom.  Following his disassociated sea tour, Commander Ryan attended the College of Naval Command and Staff at the Naval War College in Newport, RI earning a Master of Arts Degree in National Security and Strategic Studies in 2011.

In 2018, Commander Ryan reported to USS ABRAHAM LINCOLN (CVN 72) as the Combat Direction Center Officer and deployed in 2019 to FIFTH FLEET.  Commander Ryan returned to the Naval War College in February 2020, attending the College of Naval Warfare and graduated in March, 2021.

In June 2021 Commander Ryan reported as Executive Officer of the Naval ROTC Unit at Yale University.